Pipe Bands are invariably associated with Scotland or the Scottish emigration areas. Much less known is that Pipe Bands in Ireland also can count on a solid piping tradition.

The fascinating story of the Irish presence in Flanders during WW1 is tragically almost forgotten. As a reminder of the dramatic efforts of the Irish troops in our region, our band follows the tradition of the Irish Guards, the 16th (Irish) and 36th (Ulster) Divisions, and has chosen as its mascot, the same impressive breed which at that time was brought over by the boys from the Emerald Isle: the Irish Wolfhound.

At this time the band has two mascots : Magnus and Paddy. 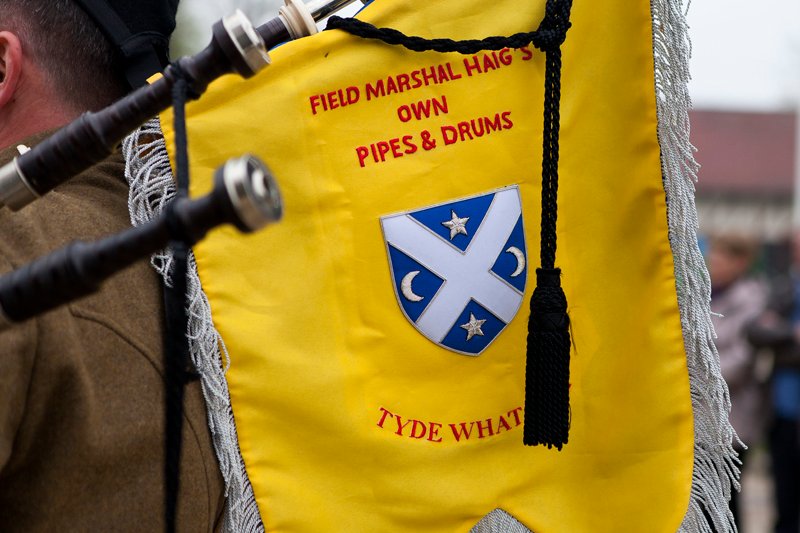 In 2016 our band received official permission to wear the Passchendaele tartan. This commemorative tartan was designed by two Flemish people in 2006 and is registered with the Scottish Tartan Authority (ITI no. 6982) as “Passchendaele Commemorative Tartan”.

The design is entirely inspired by the story of the First World War. The main colours are dark red and brown, colours that stand for the massive bloodshed during the battles and the colour of the mud of the battlefield at Passchendaele during WW1. A fine bright red dash refers to the “poppy”, the symbol of remembrance, which finds its origin in the poem “In Flanders Fields”, written in Ypres in May 1915 by the Canadian doctor John McCrae. Like many Canadian soldiers, McCrae was also of Scottish descent. A discreet black stripe represents mourning. Yellow, black and red are the official colours of both Flanders and Belgium, which displays not only a link to the area, but also to the deployment of its own army.

The copyright on the tartan rests with the designer.

The band has chosen the “crest” (literally “helmet or headsign”) of the Scottish Lowland family Haig.

The “crest” of the Haig family symbolises a rock, it stands for reliability, perseverance and tenacity. The motto “Tyde What May” means, freely translated, “Let happen, what has to happen”. Both motto and symbol illustrates the band ethos we pursue, in imitation of Field Marshal Douglas Haig himself, who had to fight, along with his men, a hopeless war under extremely difficult circumstances.

Our standard or flag shows the weapon of the Haig family, which, like the Scottish flag, has the Scottish “Saltire” or Saint Andrew’s Cross as a central element. Douglas Haig was very loyal to the British Empire and the monarchy. However, this did not apply to all of his ancestors. After all, some participated, with great conviction, in the wars against the English, led by the Scottish legendary figures of Robert the Bruce and William Wallace.

Other elements are the thistle, the national flower of Scotland and the motto and the name “Passchendaele”, referring to the village near Roeselare where one of the most important battles of the First World War took part. 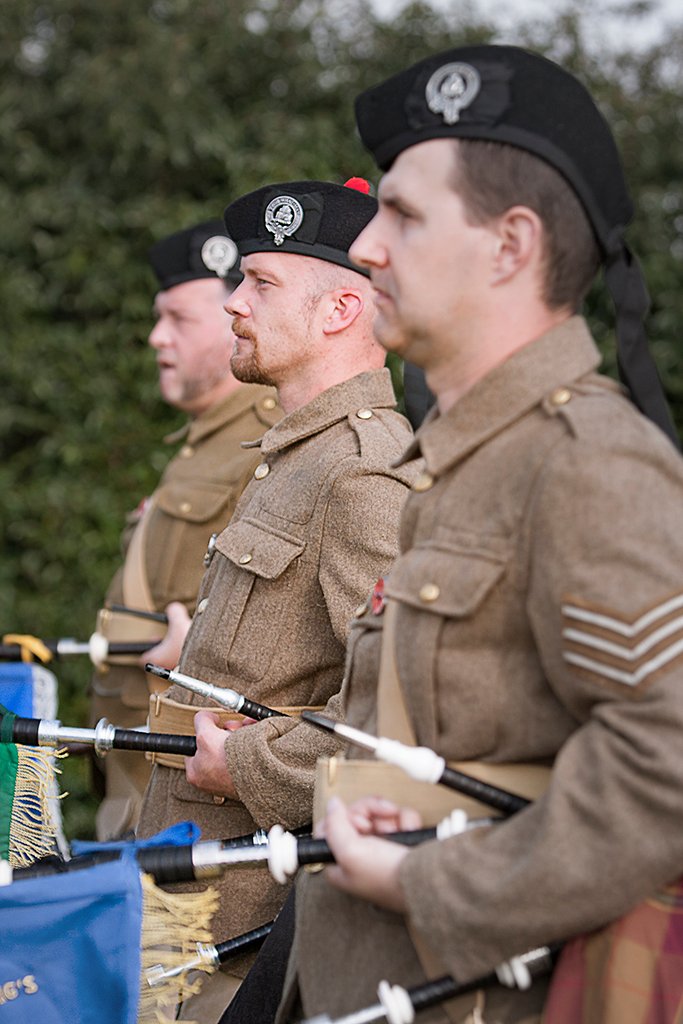 Most of the performances will be given in a military uniform that is based on that of the Scottish Highland Regiments of the First World War. Because we are a remembrance band and not a re-enactment group, we have chosen the specific Passchendaele Commemorative Tartan, rather than a military kilt.

As headgear, our pipers wear black Glengarrys, the drum section Tam O’ Shanters, both with the “Red Hackle”, the red plume of the Black Watch regiment. The flashes are dark saffron, this as a reference to the Irish regiments who also brought a number of Pipe Bands to Flanders.

By attaching specific pipe banners to the bagpipes, reference is made to the nations, regions or units who maintain a tradition of Pipe Bands or, from their origins or migration background, could boast of a Scottish tradition.

On specific occasions where a uniform in military style is less appropriate, a simple civilian uniform is worn with dark shirt and saffron tie.

The drum section plays, depending on the performance, on rope drums in old style or modern drums. Some members of the section follow historical tradition and are also trained bugle players.